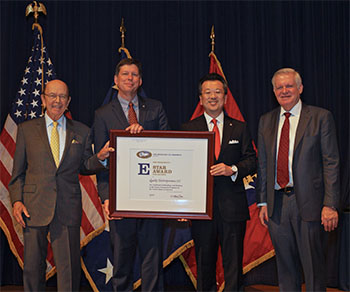 WASHINGTON – Today, U.S. Secretary of Commerce Wilbur Ross honored 48 U.S. companies and organizations, recognizing their contribution to American export growth during the 2019 President’s “E” Awards ceremony. Winners hail from 25 states, and of this year’s 48 honorees, 41 are small and medium-sized businesses, while 26 firms are manufacturers.

“President Donald J. Trump has placed a high priority on restoring the balance of global trade to ensure American businesses and workers are not left behind,” said Secretary of Commerce Wilbur Ross. “With companies like these awardees who have placed a premium on export success, we can reclaim the lost years of ever-expanding trade deficits.”

The President’s “E” Award was created in 1961 by Executive Order of the President and is the highest recognition a U.S. entity can receive for making a significant contribution to the expansion of U.S. exports. In 2018 alone, the United States exported $2.5 trillion worth of goods and services – the highest on record.

This year, 26 companies were honored with the“E” Award for Exports for demonstrating a sustained increase in export sales over a four-year period.

13 companies and organizations received the “E” Award for Export Service for assisting and facilitating export activities.

Two firms were awarded the “E” Star Award for Export Service, which recognizes previous “E” recipients that have shown four years of continued support of exporters since first winning the “E” Award.

One company received its 2nd “E” Star Award for Exports, which recognizes previous “E Star” awardees that have reported four years of additional export growth. It is only the fourth company so honored in the more than 50-year history of the “E” Awards program.

American companies are nominated for “E” Awards through the U.S. and Foreign Commercial Service office network, located within the U.S. Department of Commerce’s International Trade Administration. Record years of successive export growth and an applicant’s demonstration of an innovative international marketing plan that led to the increase in exports is a significant factor in selecting the overall winners.

For more information about the “E” Awards and the benefits of exporting, visit www.export.gov.